Soil erosion has become the most important environmental problem of modern day agriculture. It can remove fertile topsoil, clog drainage systems (which when affecting roads can lead to fines or prosecution) and pollute watercourses. Simple changes in practices can reduce the occurrence and intensity of these events and provide a range of benefits for your farm.

What can I do to improve soil conditions and minimise runoff?

How can I minimise erosion?

Here are some ideas to help keep the soil in the field and avoid the environmental and economic impacts of erosion.

What are the factors that affect the risk of erosion?

Avoiding bare ground in winter is a key way of mimising erosion, especially when working in challenging soil or weather conditions.  A survey looking into resource management practices undertaken on farms across the south west examined how many farmers are actually planting cover crops to reduce run off and minimise erosion on their farms.

The graph here shows the responses to the farmer survey (2012) looking at cover crop use on south west farms (click on the graph to expand it).

This shows that 60% of surveyed farmers were using cover crops either on a regular or occasional basis. For more information on the importance of keeping soil in the field, please read our section on mitigating diffuse water pollution and reducing runoff. 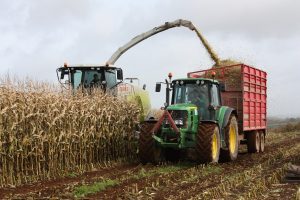 One of the big risk factors with growing maize is harvesting it in less than ideal conditions. This is a real danger period for your soil in terms of not just compaction but also causing conditions which (with the right weather conditions) will lead to high levels of run off and erosion.

How can I reduce soil erosion after maize harvesting?

If a cover crop cannot be successfully established after maize, using a heavy cultivator to roughen the surface is advised. The whole maize field does not need to be roughened; a few strips running across the field slope will break the momentum of surface runoff flowing downhill. Strips might need to be added to on the uphill side as they lose their effectiveness over winter, but they should never be reworked.

A single roughened buffer area at the bottom of a slope is unlikely to retain its effectiveness as runoff will likely have gained momentum by the time it is reached, overtopping it.

A rough, uncompacted soil surface to allow infiltration of rainwater and reduce the momentum of surface flow is the key, whether it is as a result of a rough seedbed for winter wheat or using a heavy cultivator. 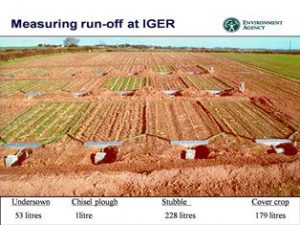 This image shows work that was undertaken by Rothamsted Research North Wyke, funded by the EA that measured the amount of runoff collected from different pre- and post-harvest management treatments. As can be seen, leaving the field with bare stubble caused the greatest volume of runoff, under sowing proved to be quite effective, but using a chisel plough/heavy cultivator was by far the most effective. The cover crop treatment, rye corn, was sown late during inappropriate conditions with an inappropriate type of direct drill. This led to a poor establishment, which resulted in a destabilised soil and increased soil and phosphorus loss. This treatment was implemented in order to demonstrate the negative effect of bad management on a practice, drilling a following crop, which is considered to be good practice for reducing soil erosion

Why is runoff important?

What is the scale of the problem?

Why are we seeing increased sediment loss?

Residue and trash incorporation can make a big difference to organic matter content. This can be done through drilling a green cover crop post-harvest or using the trash to provide a soil cover. Better soil management will reap rewards in terms of erosion vulnerability. This can include applying nutrients only where they will be required, i.e. in the soil for the crop, rather than being washed off the field where they will pose environmental risks.

Soil that has been eroded by water can travel large distances and can be seen on roads, and in streams and reservoirs. Nutrients that wash off the fields can cause a buildup in watercourses leading to problems with water quality. The main cause of erosion is bare soil during wet seasons. Excessive tillage operations, as well as cultivating when soil moisture content is low, also helps destroy the soil structure and makes soils more susceptible to erosion.

Soil erosion and run-off from Frogmary Green Farm and neighbouring farmland caused muddy flooding on the nearby road. Nick Bragg and Catchment Sensitive Farming found an integrated solution to cutting pollution through working with a number of farmers in the Catchment.