The use of clovers and other legumes as a source of Nitrogen (N) is an organic practice that is becoming an increasingly attractive proposition to all farmers due to globally rising costs of mineral N fertiliser and the negative environmental impacts of its production and use.

If cutting green manures for silage, the cutting time is key with clover and grass mixtures as the silage will be more palatable and nutritious if cut before flowering. Cutting the crop and removing the fodder will stimulate growth and more nitrogen fixation by the legumes in the mix. However, consider the following:

Legumes will only fix nitrogen when the soil is above 8 degrees C.

They can be quite slow to establish but are persistent so reduce the need for resowing, and are most commonly sown in a mixture with grasses and used for silage or grazing whilst improving the soil.

Rainfall can wash or leach nitrogen and other nutrients out if soil is left bare. Fast growing species with a deep root system are best for preventing leaching. Grazing rye is one of the best species for this. Mustard is also effective.

Meeting the nitrogen needs of the next crop

The rate at which nitrogen is available from green manures incorporated in to the soil depends on the type or green manure and its growth stage at incorporation. Knowing the properties of different species can therefore enable you to meet the needs of the next cash crop.

Microbiological life thrives in healthy, well aerated soil. If the organic matter is low, soil can become anaerobic which can lead to a build-up of toxins.

Black grass can be a major issue on arable farms. Growing a two year ryegrass or ryegrass/red clover green manure can significantly reduce it as it suppresses germination of the blackgrass (an annual) and reduces the population.

Nitrogen (N) is a key nutrient in helping to achieve acceptable yields and crop quality. Through an uptake of mineral N in the soil and fixation of N2 from the atmosphere, legumes can provide a source of ‘free nitrogen’

Through a symbiotic relationship with rhizobacteria, legumes are able to fix aerial N and provide it in a form that is readily available to plants.

Growing legumes in rotation allows for plant N to be built up in above and below-ground residues. It is broken down by microbial activity following incorporation and released for uptake by the following crop. Legume-based leys provide additional benefits through soil cover and reduced soil disturbance. Greater N fixation has been demonstrated in minimum tillage systems.

For most legume species, yield increases as the quantity of fixed N increases. However different factors affect the amount of N that is fixed, which include:

Because fixation tends to decrease with legume age, there are some contradictions which can make management decisions difficult.

In most organic rotations more N is likely to be fixed where legumes follow crops that have previously depleted soil N levels. The soil mineral N pool can be increased by manure application, grazing, and cutting and mulching.

How can I maximise N fixation?

Growing a legume in a mixture with a non-N fixing species can increase the proportion of N obtained from the atmosphere. In grass / clover leys, the grass utilises the soil N; the build-up of N that may otherwise inhibit fixation is therefore avoided.

The use of permanent beds of legumes grown alongside a cash crop can allow both cash and fertility building crops to be grown every year. The companion crop can be mown or grazed to control competition and encourage nutrient transfer. Results from a Defra funded study at the North Wyke (Rothamsted) research site in Devon, conducted in collaboration with Duchy College, show that the proportion of N that is fixed from legumes is greater when the crop is cut and removed rather than cut and directly mulched. For the full report, click here

Whilst for livestock farms, cutting and removing is common practice in the form of silage-making, in an all crop situation such as a vegetable rotation, the most effective use of a fertility building crop would be to remove regularly cut material and apply it as a mulch to other crops. This would provide additional organic matter and encourage the fertility building legumes to maximise N fixation.

How can I minimise nitrogen losses?

Before N from legumes can be used by the crop it must be mineralised in to plant available form (nitrate and ammonium). Once in this mineralised form it is susceptible to loss. It is important therefore that as much as possible is retained for use by the crop.

What else should I consider?

How can I improve efficiency of N availability?

One way to improve efficiency is to combine several legume and grass species in a mixture, incorporating a number of slower growing species. This can result in a more efficient transfer of N to the subsequent crop as a result of different species decomposing at differing rates, providing more opportunity to match N availability to N requirements. This has been investigated in the nationwide Legume LINK project LK09106 (LINK PDF), funded by DEFRA and administered by research stations (hubs) across the UK. Duchy College Rosewarne was the hub for the South West with several farms taking part. The research has shown that:

Farmers who took part were asked to drill their usual grass ley mixture as a control and half an acre of the all-species-mixture (provided by the Organic Research Centre at Elm Farm). Farmers found that adding grass to legumes increased the dry matter output per hectare and that the grass grew quicker when mixed with legumes.

The success of fertility building crops depends on a number of factors such as soil type, species characteristics i.e. establishment rate and growth habits, timing of planting, how they are integrated with other crops and environmental conditions.

What do I need to consider?

Adapted from Sort Out Your Soil; A Practical Guide to Green Manures

The nationwide Legume LINK project (LK09106), funded by DEFRA, investigated combining different legume and grass species in mixtures, incorporating a number of slower growing species. Replicated field experiments were conducted over three years at multiple locations, testing the performance of 12 legume species and 4 grass species sown in monocultures, as well as in a mixture of 10 of the legumes and all 4 grasses (the All Species mix, ASM). 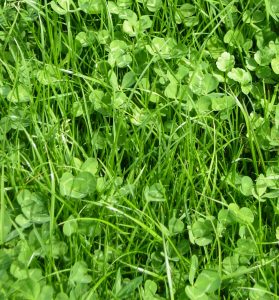 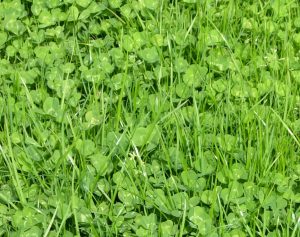 What are farmers doing?

In Europe, organic farmers most frequently use grass and clover mixes, the most popular being white and red clover (Trifolium repens and T. pratense), and perennial and Italian ryegrass (Lolium perenne and L. multiflorum). The potential for N fixation by these leys is high but the establishment can be under-par due to the cool, moist conditions required by the clover species.

The current practice of using mixtures of red or white clover and ryegrass can lead to a lack of synchronisation between the release of nutrients following incorporation of the green manure and the demands of the following crop.

What do farmer’s think?

The comments below are from individual farmers that highlight the different considerations when using mixed crops for fertility building. All comments were recorded from Legume LINK meetings held between 24th January 2011 and 4th of May 2011.

“Seeds of different sizes go through the drill at different rates. Settlement in the bag means that the bigger ones go down first and the bag has to be re-filled. There is a time/cost factor in this.”

“Low ground cover is no good for our cutting regimes.” (Referring to species such as black medic which is initially matt forming, dense and woody.)

“I would like a mix which suited the plants to the regime and management of the farm.” (Some plants react better to being cut / grazed regularly, some grow better for silage. These often out-compete the finer herb species.)

“Italian ryegrass forced itself to head under stress (due to dry weather conditions) and had seeded itself before bulking up. There is an implication for the following wheat / trit crop being infested with Italian ryegrass. Perennial ryegrass does not bolt so fast.”

“Huge variation in species maturing and bulking leads to problems with selecting a cutting date and making good quality silage.” (However the farmer was happy with the silage he made. He suggested having strips of herbs like the Sainfoin separately so that they are not outcompeted by the stronger growing herbs in the mix)

“All the species were there in year one, they were diminished in year 21 and non-existent in year 3.”

“The recovery rate was good but the herb species which had been there in autumn 2010 were not there by spring 2011. Two cold winters finished them off.”

“Found that red clover fixes well and gives the boost that his farm needs. White clover grazes but does not fix so well.”

“Red clover was old before it was cut and had a tendency to woody stalks which was not so good in silage.”

“I thought Italian ryegrass and red clover would dominate the sward but it didn’t. There was a good balance.”

Click here for a quick guide to help you choose the most appropriate green manure crop. (Taken from Sort Out Your Soil; A Practical Guide to Green Manures)